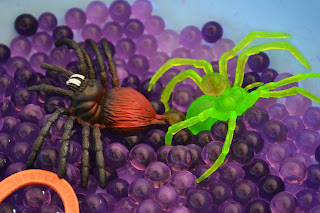 Water beads (aqua beads) have become quite the sensory rage in the preschool world. I first came across them last month when I Can Teach My Child posted a Monster Sensory Tub on one of the It's Playtime posts. Then The Chocolate Muffin Tree has some Water Bead Fun!!! with some bugs and other creatures. Water beads looked like some much fun that I had to check them out for myself. Lucky for me the dollar store carried them so I bought two containers of them the other day. Since they were clear, I added some purple food coloring to the container, shook it a bit, and let it sit overnight. My son's anticipation was growing as he watched them sit on the counter until I was ready to set them out. I dumped them into a large, plastic bowl and added some spiders, snakes and lizards, as well as some containers for "measuring" and left them on the table for him to enjoy.

Michael explored the texture of the beads first, touching and squishing them. 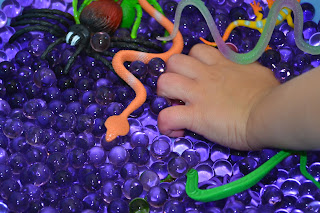 Michael compared the beads to boba, which is a form of tapioca used in Asian milk tea and other drinks (one of his favorite things to eat/drink). We then had the discussion that these are NOT edible! Since he couldn't eat them, he began feeding the beads to the snakes and spiders.

Michael loves to pretend cook, so I always provide containers with sensory play. Pouring back and forth into different sized containers is a great pre-math (volume) activity. 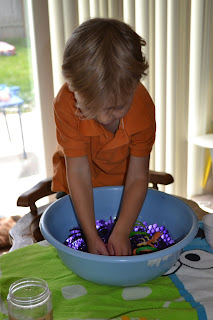 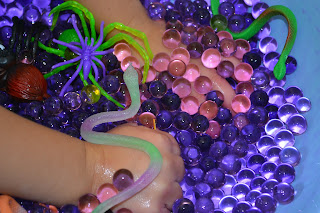 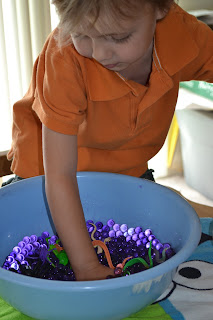 For a child that really enjoys sensory play, I highly recommend water beads! My son played with them for over an hour! They are squishy, slimy, wet and have many applications. Michael has already mentioned he's like to toss them into the bath...we may just give that a try.

What you should know: